Tonight is the 55th annual Academy of Country Music Awards. While we look forward to this year’s show, let’s reflect on past legendary performances of the ACM Awards. Alan Jackson, Tim McGraw, Charlie Daniels and George Strait show us the beauty of live country music.

This iconic performance starts off the top ten list. Alan Jackson’s 1994 performance was memorable, especially because of the singer’s frustration and visible protest towards the Academy. Jackson had been told to perform with a prerecorded tape, and in protest, he sent his drummer without drumsticks. In the video, you can see the drummer hilariously moving his arms without sticks, as listeners can hear drum music though he is not actually hitting them. Alan Jackson’s cut-off Hank Williams tank top is also noteworthy, a fashion choice that is far from the glitzy, stylish-wear many singers choose to perform in.

Following legend Buck Owens’s death on March 25, 2006, an all-star crew of singers tipped their hat to the man who inspired them. Dwight Yoakam, Brad Paisley, ZZ Top’s Billy Gibbons, The Byrds’ Chris Hillman, Travis Barker, Tom Brumley, that year’s host Vince Vaughn, and Buck Owens’ son, Buddy Alan, all took the stage for the performance. As Vince Vaughn says while introducing the tribute, Buck Owens “shaped the sound of country music and spun it in a new direction.”

3. Toby Keith Unleashes ‘Courtesy of The Red White And Blue’ in 2002 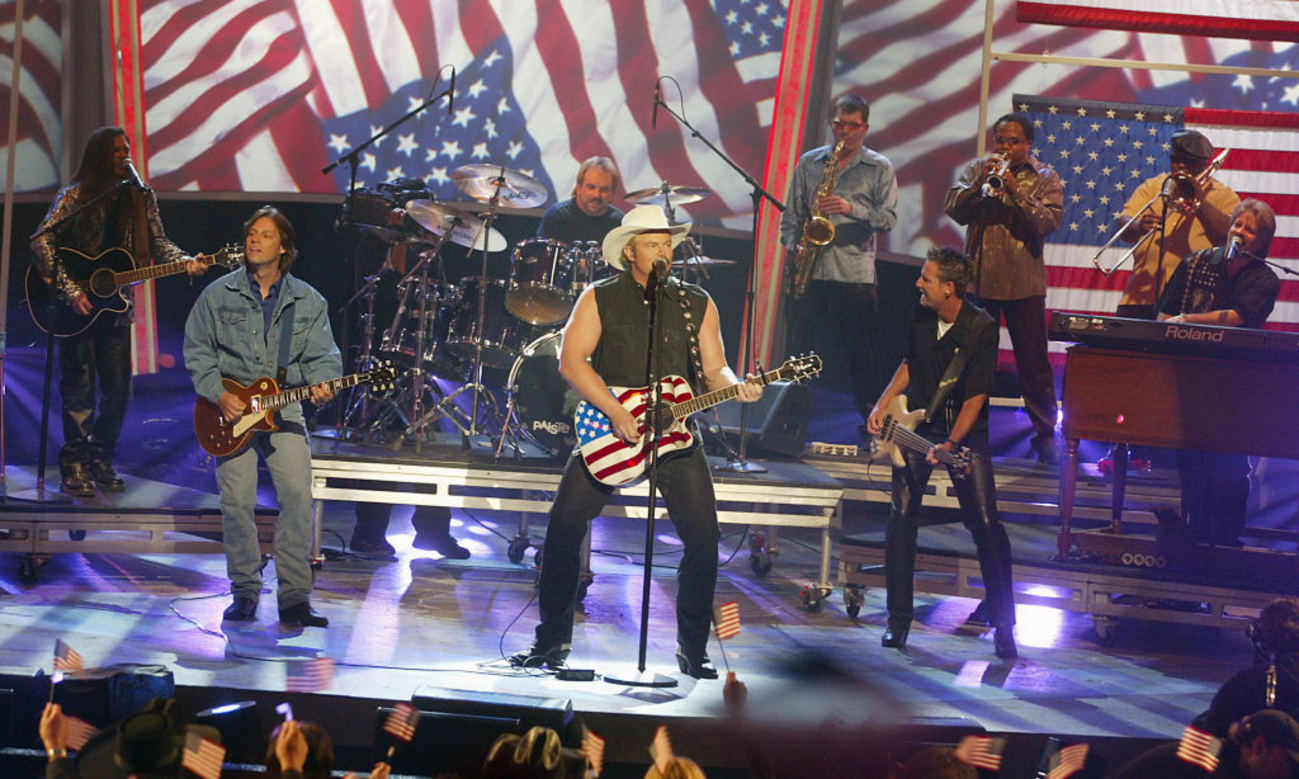 In 2002, American hearts were still grappling with the fear, sadness, and outrage of the attacks. Toby Keith performed the song he wrote about his emotions on the situation, giving American country fans a rallying cry for unity. The song highlights USA’s toughness and grit, singing “When you hear mother freedom start ringin’ her bell / And it feels like the whole wide world is raining down on you / Brought to you courtesy of the red white and blue.” Toby Keith’s performance of American pride and tenacity during a time of fear, surely makes the top ten of all-time ACM moments. 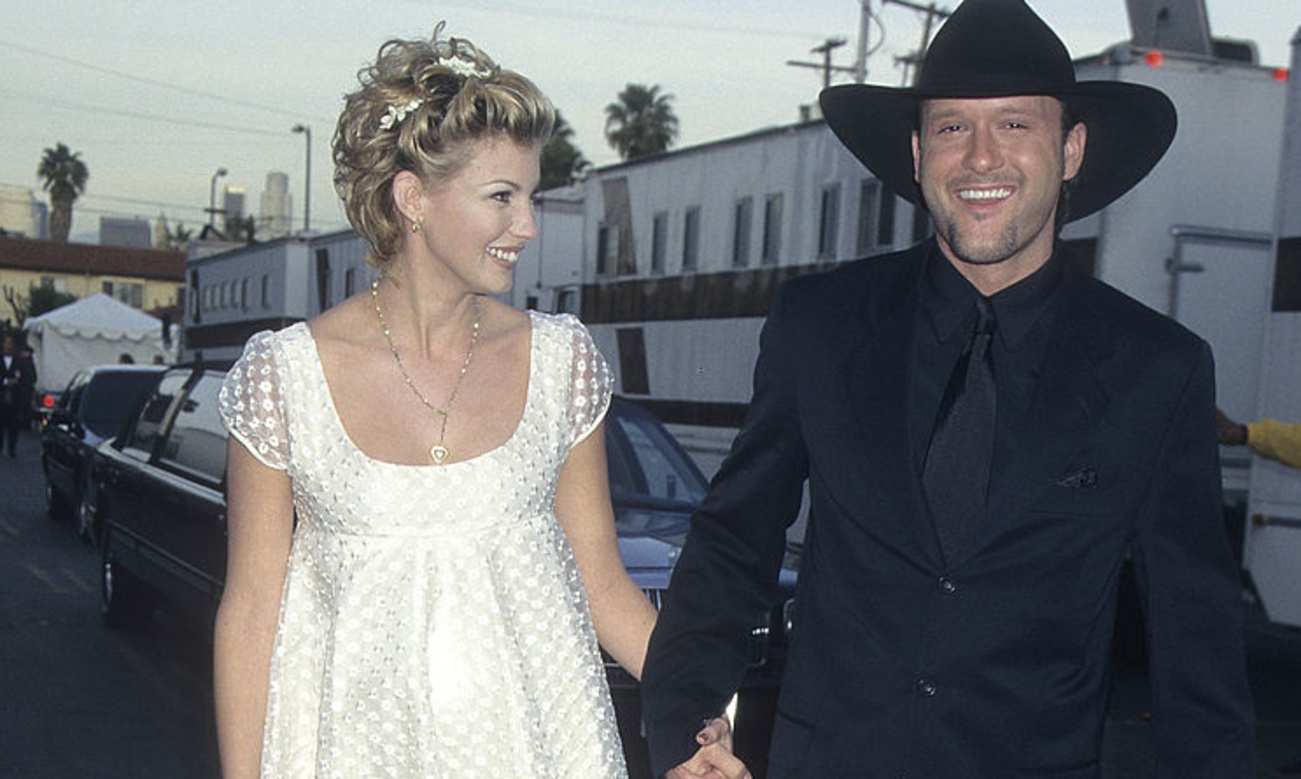 Tim McGraw and Faith Hill have been a fan favorite country couple since falling in love on tour and getting married in 1996. Their 1997 ACM Awards performance of “It’s Your Love” stunned fans, especially because Faith’s baby bump was visible in her white dress during the show. The 2014 performance of the hit “Meanwhile Back At Mama’s” is just another example of the couple’s incredible stage presence and talented voices. The crowd goes crazy as Faith walks out in an absolutely stunning gown while Tim sings about finding his “girl.”

Yes, Taylor Swift is more of a pop star now, but her beginnings in country music can’t be ignored. A few months after releasing her debut album, the young singer performed her song ‘Tim McGraw’ during the 42nd Academy of Country Music Awards. As she sang, “When you think Tim McGraw, I hope you think my favorite song,” McGraw and his wife stood beaming in the front row. 17-year-old Swift finishes her performance by walking down with her acoustic guitar and sticking out her hand to introduce herself. “Hi I’m Taylor,” she says as the crowd erupts.

Five country music greats opened the 2010 ACM’s singing Creedence Clearwater Revival’s ‘Travelin’ Band.’ The performance is absolutely electric: the singer’s energy is contagious and the lighting is reminiscent of all-star rock shows. While the performance is jaw-dropping, the best part may be Charlie Daniel’s line to kick off the beginning of that year’s show. As the camera zooms in, Charlie shouts into the microphone with his iconic drawl, “That’s how you start a TV show son!” and just like that, the 2010 ACM Awards began.

It’s always nice to see one country star appreciating another’s greatness. The story behind Alan Jackson’s performance of ‘Pop a Top’ that transforms into Jones’ “Choices” is another example of singers’ firing back at the Academy of Country Music. George Jones had been asked to perform at the ’99 Awards, but was asked to play a shortened version of his hit “Choices, rather than his full song. Jones refused and ended up not even attending that year’s award ceremony. Alan Jackson was also asked to perform, and given time for his full song. In an act of solidarity for Jones and a slight ‘screw you’ to the Academy, Jackson broke into “Choices” during his performance. At the song’s close, Alan Jackson quickly and quietly walked off the stage, wasting no time to appreciate the audience’s applause or say any words to the crowd.

The Backstreet Boys and Florida Georgia Line’s performances in 2017 is great. The two bands coming together in “God, Your Mama, and Me” is insanely catchy and a site to see. But the real reason this ACM performance appears on this top ten list is Tim McGraw. No, he doesn’t appear on the stage, but his reaction (around the 5:58 time) to the singers breaking into choreography while singing the classic BTB song “Everybody,” is pure gold. Watching Keith Urban jam out in the crowd and sing the chorus into the microphone is pretty amazing as well.

A list of country stars has to include George Strait. The singer gave a refreshing taste of classic country music with his performance of ‘Run’ amongst the trendy pop-country of today. Miranda Lambert joins him on stage adding her phenomenal voice to the legend’s 2001 song. The traditional slow country reminds fans where the genre started and the beauty of lyrics.

To round out the top ten we have to throw in one last Alan Jackson song. Just two months following the September 11, 2001, terrorist attacks, Alan Jackson sang “Where Were You When The World Stopped” for the first time at the 35th ACM Awards. He had written the song just a week before after the lyrics appeared in his head late one night. The song’s lyrics bring unity in the shared-experience of fear, shock, and anger. The emotional song speaks to the range of emotions felt and the performance was solemn and moving. Alan Jackson, an absolute legend.